By Eleni Kostopoulos at NEO Magazine 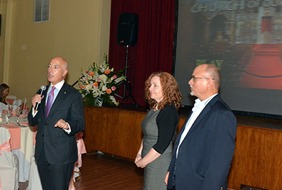 When Mike Psaros, co-founder and managing partner of KPS Capital Partners in New York City, was named Executive of the Year by The Hellenic American Bankers Association (HABA) last May, he was asked to provide a biopic to be presented at the award ceremony. As a shrewd businessman with a keen eye for talent, Psaros selected a seasoned professional to undertake this task; MiB Mediaworks founder Mark I. Brodie, an Emmy-winning editor and documentary filmmaker with more than 30 years of experience working for national and international broadcasts, was an obvious choice.

Following several interviews with Psaros’s business partners and associates, Brodie was asked to interview a somewhat surprising subject: Father Elias Villis of the Greek Orthodox Church of Our Saviour in Rye, NY, a parish that Psaros and his family belong to. On the morning of the scheduled interview, Father Elias called Brodie to warn him about scaffolding that would obstruct the view of the church, where the interview was to take place. Brodie was untroubled by the potential distraction, and he and his crew proceeded to the church. When they arrived, they observed the scaffolding, which partially cloaked bold, colorful iconography that was being installed in the temple.

“I walked into this church- and I have not been to many Greek Orthodox churches in my life- and I was blown away,” said Brodie. 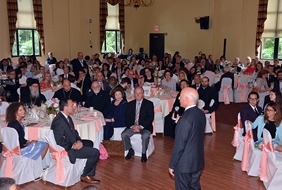 Later that day, Brodie’s colleague Taryn Grimes-Herbert interviewed Father Elias in the temple after the construction team had left. Grimes-Herbert, who has spent 20 years writing, producing and directing scripted and documentary projects for television (and was previously a Broadway, film and television actress), intently observed Father Elias as he showed the crew each image and shared inspirational stories of martyrs and saints who overcame colossal atrocities.

“Anyone who walks into our church for the first time is literally mesmerized by the beauty of what we’ve done here, and anyone who doesn’t is looking at it as art; we’re called to look at it as prayer,” said Father Elias.

“Iconography is a theological confession of our faith,” said Father Elias. “It is a practice, or a veneration, that was approved by a whole ecumenical council in the eighth century. When we venerate an icon, we venerate an image, person or scene depicted in the icon- we’re not actually venerating the canvas, or the painting or the wood itself- we’re venerating the image through the icon, which is ultimately what we do through Christ.”

Brodie and his crew began to film Father Elias as they engaged in conversation with him about the church’s journey with the installation of the iconography. “We filmed Father Elias in the church with the scaffolding around him, and he gave us a four-minute orientation on what it means to be Orthodox, what iconography is and the history of iconography in this beautiful space,” said Brodie. “Though this wasn’t part of the plan, I decided to make a three-minute clip, and I sent it to Mr. Psaros. After watching the clip, he called me immediately and expressed how touched he was by what he had just seen.” 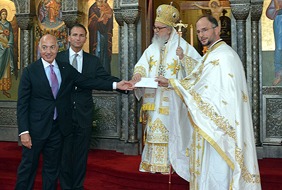 Psaros eagerly commissioned Brodie to expand on the short clip. Nearly a year later, this effort culminated into a 17-minute film packed with vivid imagery depicting the life of Jesus Christ and His saints called PISTEVO “I believe.” The film chronicles the journey of a congregation through a multi-phased campaign to complete the tradition of iconography that began generations earlier at the Greek Orthodox Church of Our Saviour.

“I’ve done thousands of interviews during my career, I was an editor at 60 Minutes, and now I have my own company, but I have never cried during an interview until [Grimes-Herbert] conducted that interview with Father Elias,” said Brodie. “He was so real and touched me so much in the time that I spent with him. That moment is what fueled the excitement I feel for this film today.”

Grimes-Herbert conducted a number of interviews with key stewards who brought the film to life. The film’s ethereal visuals provided the backdrop to personal, often emotional interviews about what iconography means to faith.

“Every interview I conducted left me with a deeper understanding of what it means to be faithful,” said Grimes-Herbert. “Everyone shared such personal and powerful stories, and they were so humble. When Lorraine spoke of the impact on the community, as a whole, and how it brought them even closer together, it was very moving. When our creative team works together to bring a story alive on film, I feel the same way.”

Psaros said that the impact of the film has been felt strongly by all those who tirelessly worked on its production.

“To mati, the eye, of this film is Mark Brodie, and the soul is Father Elias,” said Psaros, who underwrote the cost of the documentary’s production and subsequent distribution and promotion. “There’s no monetary motive. The only objective of everyone involved is to have 300 million Orthodox Christians take 17 minutes of their lives, along with their children, to watch this film. This is not about a church in Rye. This is about why a Greek Orthodox community took on this challenge of installing the iconography and how the process of completing this challenge deeply affected the community.” 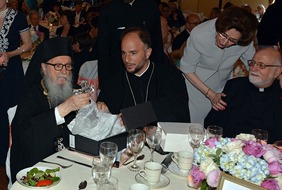 The temple of the Church of Our Saviour was built in the 1960s. In the 1980s, the congregation installed two icons, one of the Holy Mother (the Platytera), and the image of Jesus Christ (the Pantocrator). In 2012, the community came together to complete the mission that was initiated 55 years earlier.

Psaros credits His Eminence Archbishop Demetrios of America for igniting the flame that propelled this journey forward. “His Eminence came to have liturgy with us, and in the most polite way, he observed that we had white walls,” said Psaros. “This film is dedicated to the Archbishop because it was his vision that launched an entire community to undertake this challenge. The result is stunning; it is breathtaking, and this result is brought to life in this film. This film is a work of love, of passion; it has been very spiritual for everyone involved, and its purpose is to share the centrality and importance of iconography within the Orthodox Church.”

Father Elias emphasized that it was because of the Archbishop’s powerful blessing that the church was able to accomplish this feat, which other parishes could take 20 years to complete, in just three years.

Archbishop Demetrios officiated the Divine Liturgy followed by the blessing of the new iconography with Holy Chrism from the Ecumenical Patriarchate in Constantinople at the Church of Our Saviour. Following the blessing, the film premiered at the parish.

For Brodie, having been raised in a Jewish home but not religious himself, the process of speaking to members of the congregation and learning about the significance of iconography in the Greek Orthodox religion has made him a more spiritual person. For Psaros, the process reiterated his faith in a way he could not have imagined.

“With the exception of my family, there has been no greater influence on me than two things. First, being an American of Hellenic descent has provided me with confidence, and it is central to who I am,” said Psaros. “Second is being an Orthodox Christian. I never expected this, but watching the iconography reveal itself to our community has provided me with a much deeper level of faith than I ever thought I would experience. Most parishioners at our church will tell you that as each of the five phases was revealed, it took away a layer of depth to our individual and collective spirituality. Dimitrios Mourlas, the iconographer, didn’t paint pictures, he didn’t paint portraits, he didn’t paint icons; rather, the Holy Spirit worked through his right hand in what was a three-year act of prayer. As he did his work, he would stop, he would reflect, he would pray.”

Besides the deep impact the film itself made, those who worked on its production formed an infrangible bond in the process. Brodie expressed deep respect and love for Father Elias and Psaros, whom he calls “his heroes.”

“I’ve worked with a lot of CEOs, very wealthy and important people, government officials and presidents of countries, but Mike Psaros is one of the most trustworthy, honest, down-to-earth people I have ever met in my life,” said Brodie. “One thing that stood out to me is just how passionate he is in everything that he does. He got me excited from the very beginning. The same goes for Father Elias, who is an open, honest man. They are truly wonderful people.” 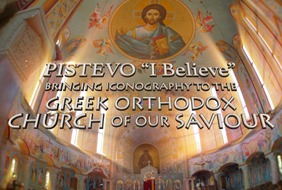 PISTEVO “I believe” will also be dubbed in Greek and will eventually contain subtitles in other languages. Following its premier, it will be available to view on the website “The Art of Belief” (www.theartofbelief.org), and it will be discussed on various social media platforms.

“Over the last 12 months, [the subject of iconography] has taken on even greater importance,” said Psaros. “By simply accessing the internet, you can witness the liquidation of Christianity in the Middle East. We are witnessing the destruction of our churches.  To know that we here in the United States have the untethered ability to create an entire church with iconography, while at the same time, those icons are being desecrated and destroyed in the Middle East, makes the message of this film that much more significant.” 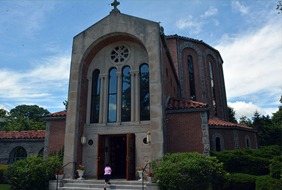 For Father Elias, the purpose of this film is to touch every individual who watches it.

“By making this film, they were able to officially archive this chapter in the life of our church for generations to come,” said Father Elias. “I hope this documentary inspires and helps people in their spiritual lives. I also hope the film aids in their approach to iconography; when I walk into the church and happen to see a lady who suffered from Stage 4 cancer on her knees right before St. Nektarios, the patron saint of cancer, I can’t put [the feeling it evokes] into words.”

Brodie and Grimes-Herbert were joined by Matt Brodie (editor), Rob Haley (director of photography), Guy Parker (composer) and a team of talented filmmakers in the production of this film.

“We called the documentary PISTEVO, because it’s all about belief,” said Brodie. “Whether it’s believing in yourself, believing in God, believing in anything- it’s what drives us as human beings.”