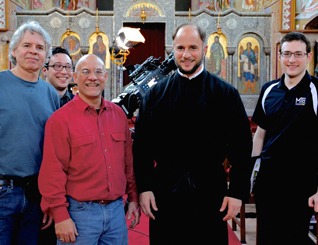 MiB Mediaworks is owned and operated by Mark Brodie. Brodie is the director of PISTEVO “I Believe,” the documentary film that tells the story of a community working together to complete the iconography in the Greek Orthodox Church of Our Saviour. He was joined by Taryn Grimes-Herbert (writer/producer), Matt Brodie (editor), Rob Haley (director of photography), Guy Parker (composer), and a team of talented filmmakers.

The creative team entered the temple to find that the iconography was still being installed. The vividly colorful faces of the saints and martyrs peered out from behind the endless scaffolding, as if to welcome the newcomers, peaking the team’s curiosity.

But it was later that day, while interviewing Father Elias in the temple after the construction team had gone home, that the iconography’s emotional impact was felt by all involved. As he guided their eyes to view each image, the parish priest told stories of inspiration. The martyrs and saints endured unspeakable atrocities, but persevered.

“And, particularly on the ground level, we are surrounded by saints of the church that lived throughout the history, that suffered either a martyrdom, or preached the gospel, or lived in areas of persecution…So we have this incredible support of examples, telling us essentially, we’re with you, you can do this, keep going.”

His words were quite powerful.

They soon began interviewing members of the parish and discovered that iconography is considered an act of prayer, a window to heaven, and depicts the transformative state of the saints and martyrs after they’d been touched by the hand of God.

It became clear to Mark, Taryn, and the team that this was much more than a story about images.

PISTEVO “I Believe” is a story of faith.